It marks the official kick-off of summer in Telluride! Mountainfilm takes place every Memorial Day Weekend and coincides with the opening of the Gondola, re-opening of businesses and the Telluride Golf Club for the season. Because of this and the amazing alpine programming of environmental and action adventure films; it's one of my favorite festivals of the year.

The Mountainfilm festival began in 1979, a time when Telluride was completing its transition from a hard-rock gold and silver mining community to a destination resort and ski town. The new era ushered a vital fresh energy and economic life into Telluride’s beautiful box canyon, and the area's rugged mountains remained the leading attraction.

It was Lito Tejada-Flores, fresh from screening his now-classic adventure and mountaineering film Fitzroyat the Trento festival in Italy, and Bill Kees, a local climber and avid outdoorsman, who inaugurated Mountainfilm. Over three nights at the historic Sheridan Opera House, they screened a dozen films, all about mountains: mountain sports, mountain cultures, mountain issues. During the days, the audiences took to the mountains themselves, climbing the thirteen- and fourteen-thousand-foot peaks with skis; kayaking the San Miguel River; and engaging in spirited conversations about the importance of wild places, adventure, art and action.

The first festivals attracted leading names in mountaineering and exploration: Royal Robbins, Yvon Chouinard, David Breashears and others. With their help, the Memorial Day weekend event quickly became a not-to-be-missed tradition for an ever-expanding circle of pioneers in diverse fields — from athletes to environmentalists and scientists to poets. Mountains soon became as much a metaphorical theme as a literal one and, as the festival expanded in size and recognition, its programming readily stretched to the leading edges of contemporary issues.

In 1999, Mountainfilm  grew the scope of its operation significantly with the introduction of Mountainfilm on Tour. By taking festival films to theaters across the country and internationally, Mountainfilm accessed large and diverse new audiences that would otherwise have no window into the filmmakers’ unique and important work.

Click Here for everything you need to know about Telluride Mountainfilm

External factors well beyond our boutique regional market (volatile equities, China trade concerns,
national political gridlock, etc.) have imposed some uncertainty in the minds of some of those seeking
the sanctuary of a second home mountain investment. On the other hand, there are still those that
place family lifestyle and a solid real estate investment a notch above a “zip lock” on paper liquidity.

The first quarter of 2019 yielded a 4% increase in gross dollar sales ($114.8M vs. $110.3M) over that
same period of 2018, despite that quarter riding the “coat tails” of the new tax law and a burgeoning
economy. In fact, March sales demonstrated a 16% increase in gross dollar sales over the prior
March, suggesting that momentum is on an upswing. Overall, transactional numbers are almost
exactly the same quarter to quarter. Sales in the Town of Telluride ($48.1M vs. $37.8M) continue to
demonstrate strength with an increase of 27% (Gross Dollars). Although Telluride Mountain Village
condominium sales remained stable with $27.2M in sales, the lack of sales of single-family homes
was a factor in that market’s decline of 20%. The balance of the Telluride Region received renewed
investor focus with a 32% increase (Gross Dollars --- $22.37M vs. $16.9M).

It is certainly noteworthy that, looking back March to March over a two-year period, sales on the
upper end of the pricing spectrum in the Town of Telluride homes (above $1000 PSF) are holding
value with 18 sales during each of those periods at nearly identical average PSF’s in excess of $1200.
The sale of Telluride condominiums experienced almost identical results for these time periods with
12 sales each at an average PSF of $1172. This would certainly lead one to believe that values are
stable, and with several condo projects under construction garnering higher contracted prices, values
could very well be on the rise. 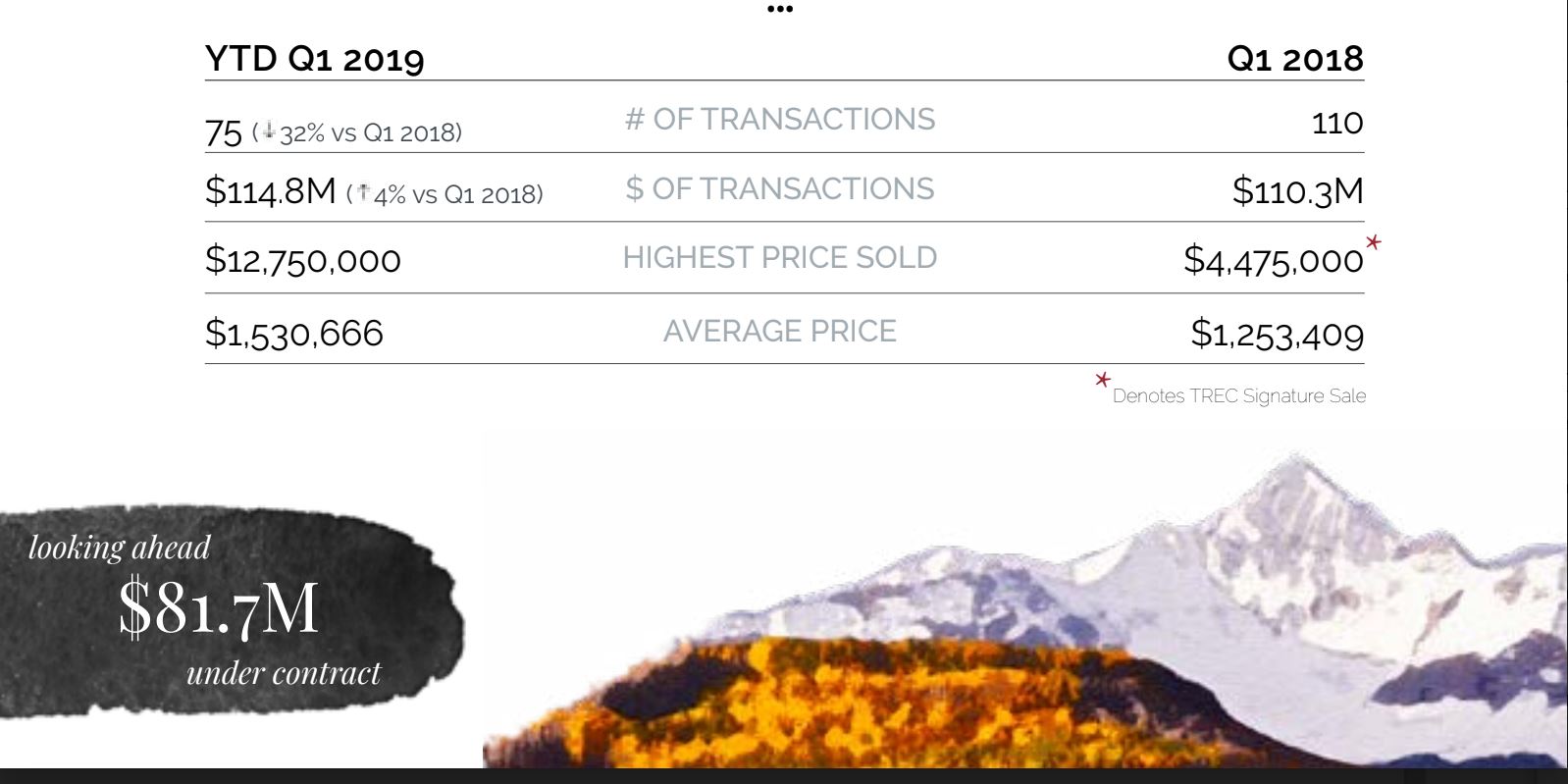